Charles Pollock, was born in 1930 in Philadelphia.

From 1944 to 1949 he studied at the Cass Technical High School in Detroit where he won a scholarship for the Pratt Institute of Design. There he concluded his education with  a BA in Industrial Design.

Charles Pollock exemplified in the conceptual visions of his designs, Pollock has a strong internal and emotional connection to seating. It was Florence Knoll’s recognition of his unique talent that secured his reputation as one of the world’s preeminent furniture designers. He is the recipient of many awards including the IBD Bronze Medal and the Dutch Institution for Industrial Design. Pratt Institute’s 1991 tribute to Mr. Pollock honored him with its Excellence by Design Award.

Charles Pollock designed an executive chair for Knoll in 1965, structured around the aluminium extrusion of its rim.

"There is no inner spine in this chair...," says Pollock "it doesn't rust, it doesn't tarnish, it doesn't fade." 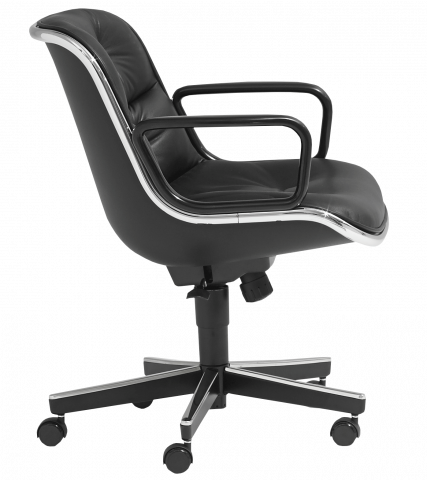